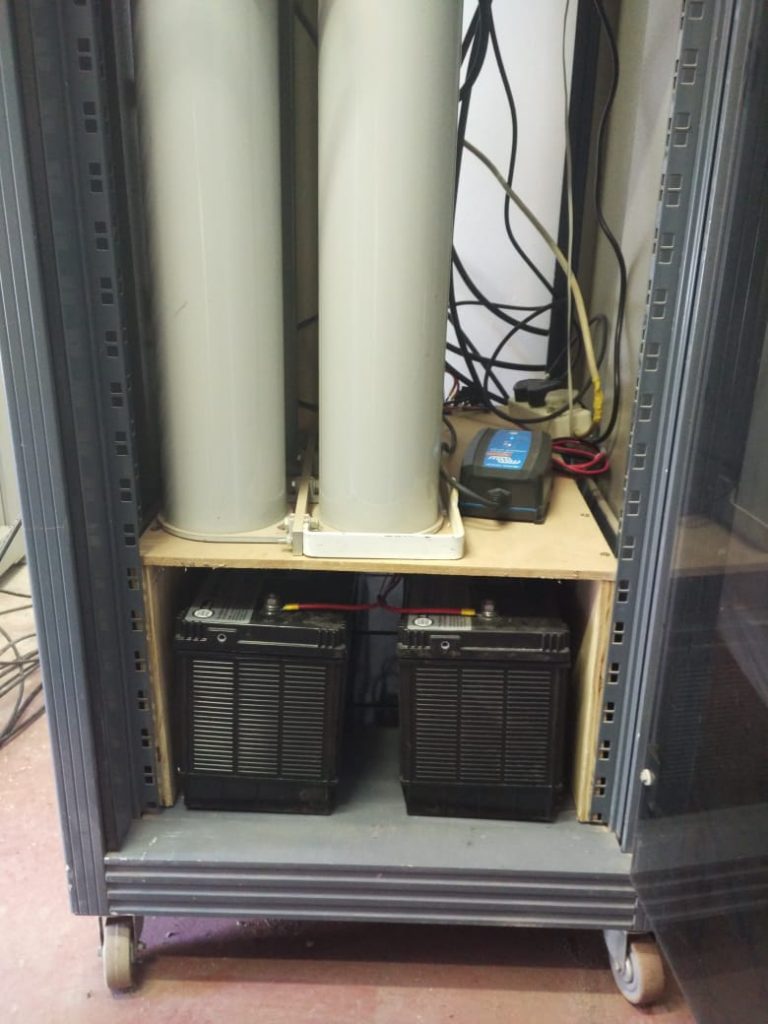 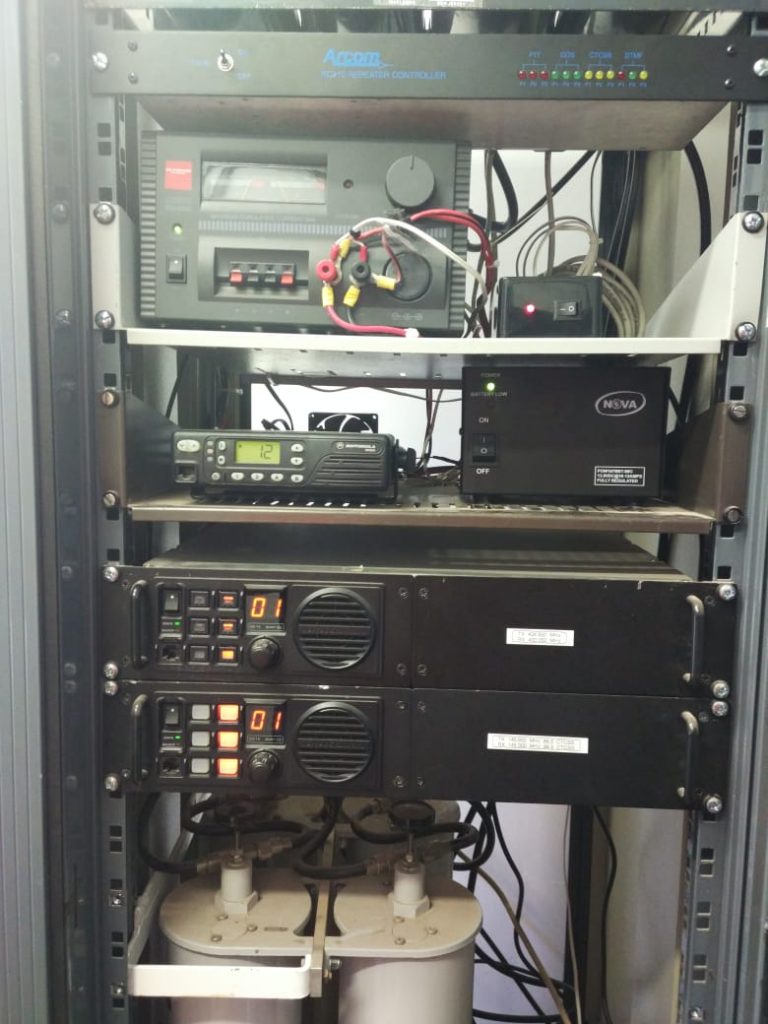 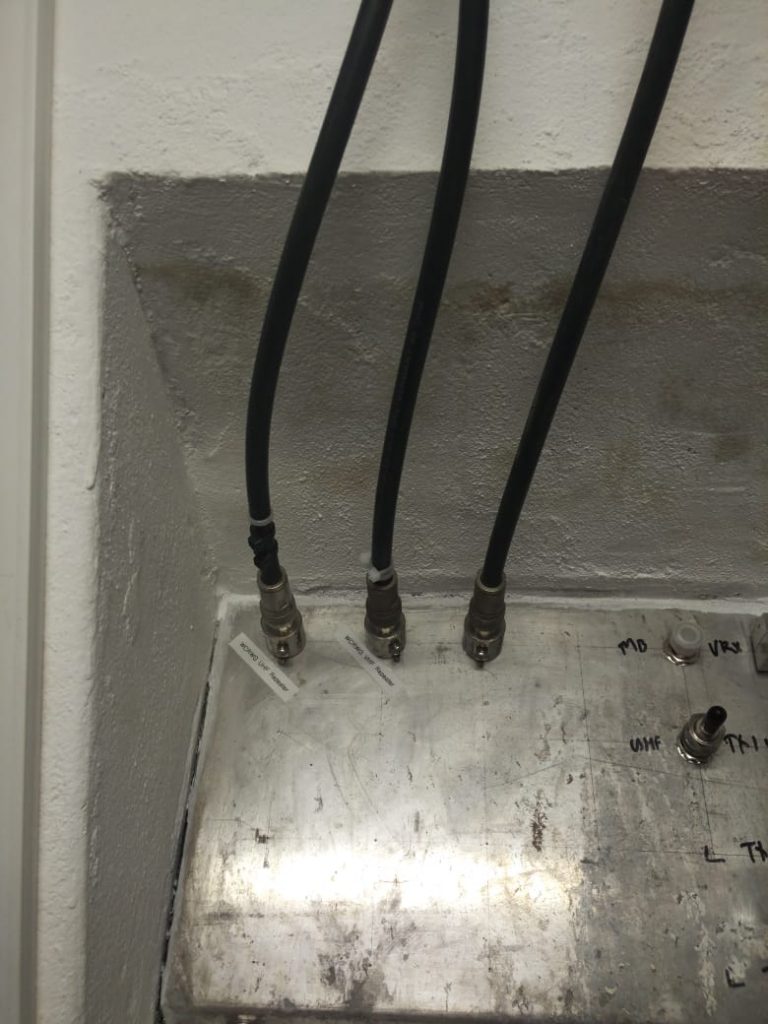 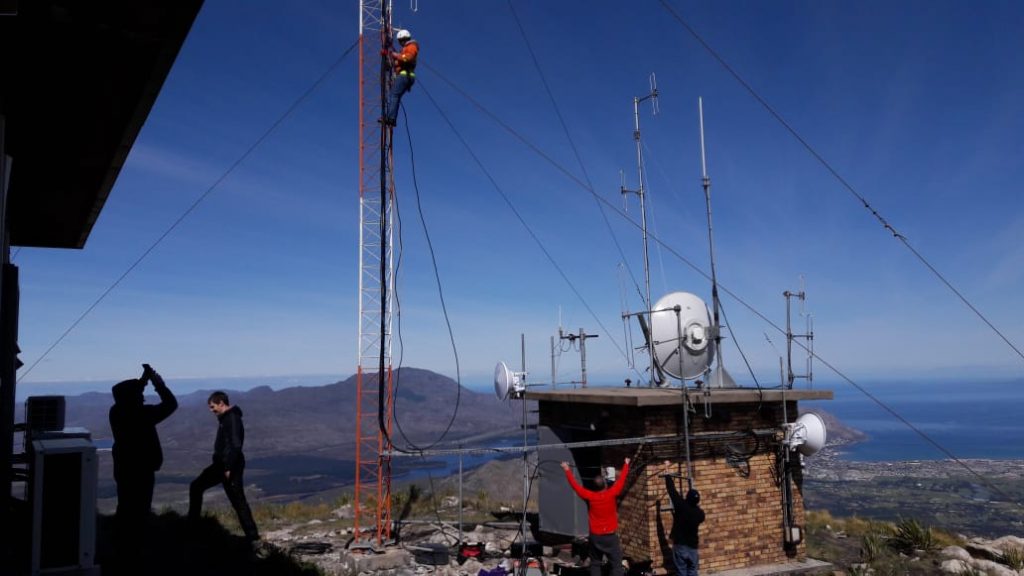 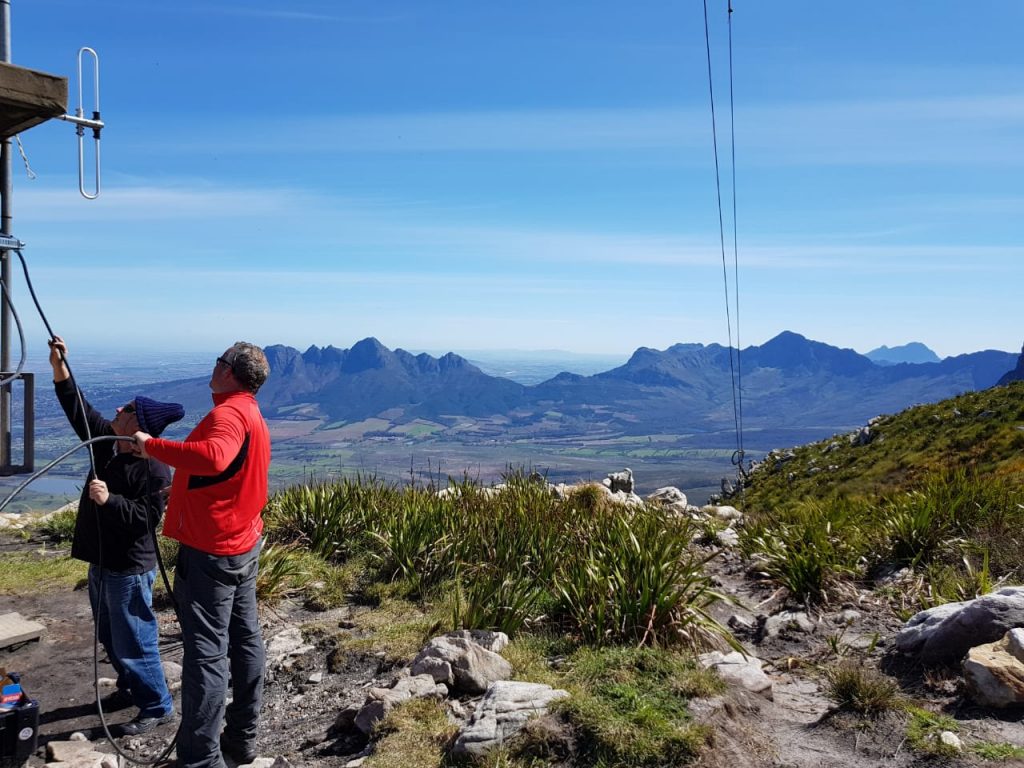 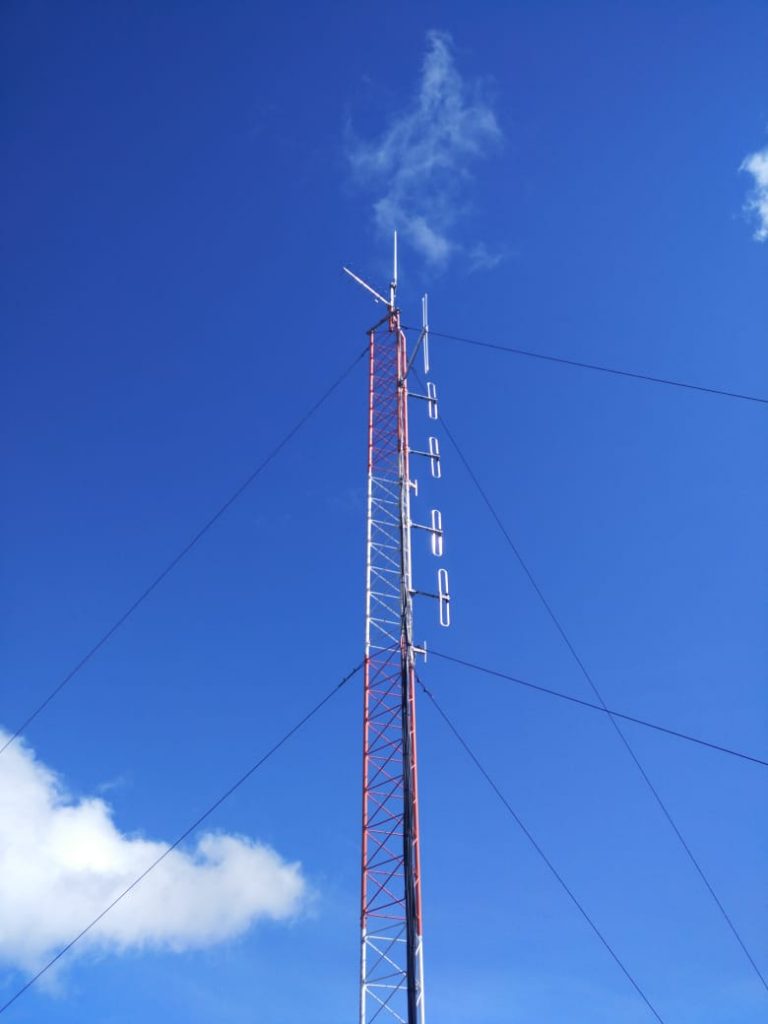 Jan (ZS1VDV) and Rassie (ZS1YT) went to Hanskop reconfigured the repeater controller and did all measurements for the big site power upgrade and antenna migration.

Most site visits starts the evening before the time with a 1 hour planning and packing session. 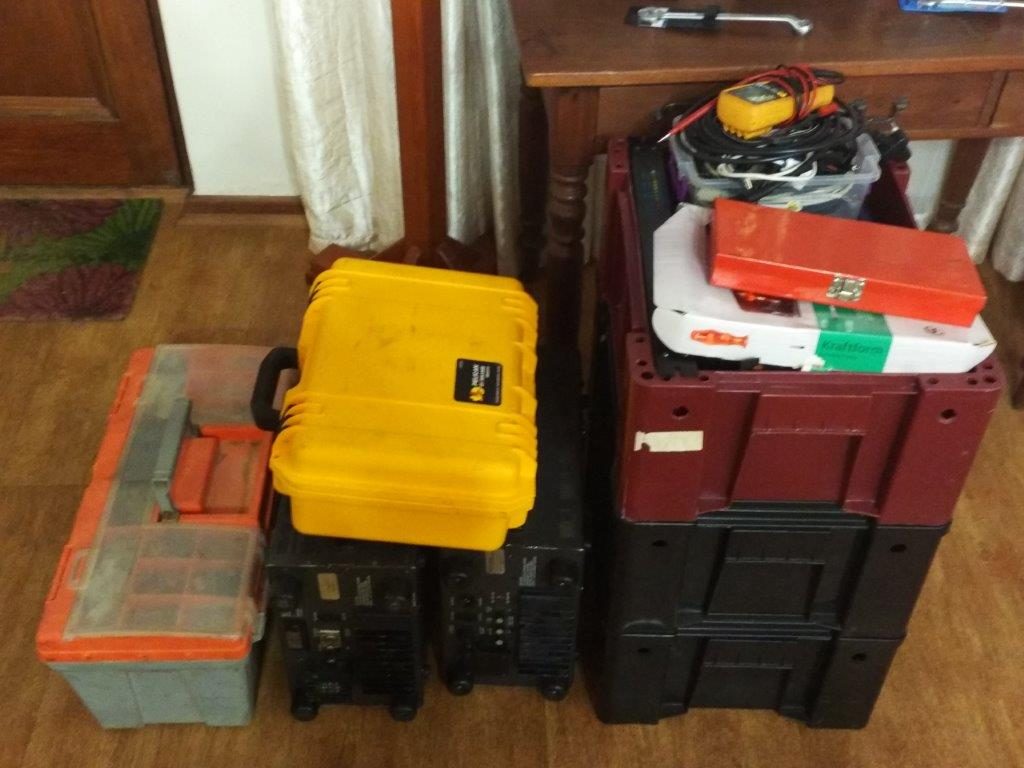 Tools and Spares for trip

Leave for Strand 07:30 from Stellenbosch.

Drive to site, which was very long and challenging drive. Had to “find” a way to the top. MMMM, where to now?

Some holes with bakkie for size reference

With all the power interruptions and no backup power, the site controller’s EPROM got corrupted. Reprogrammed the controller. Changed default for links to VHF and East. (please see updates DTMF updates on Hanskop)

Did some detail measurement for coax and battery placements. View from top in mist 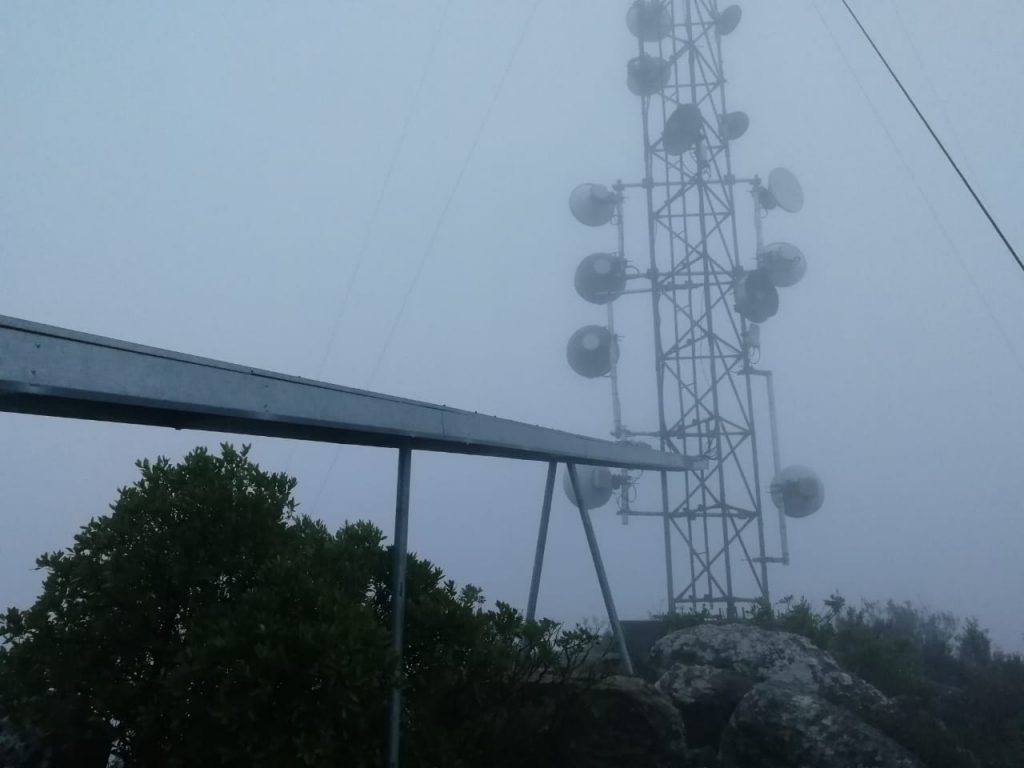 The reconfigured UHF repeater ZU9DMR was reinstalled on site.

A new gateway was installed for the VHF D-Star repeater. 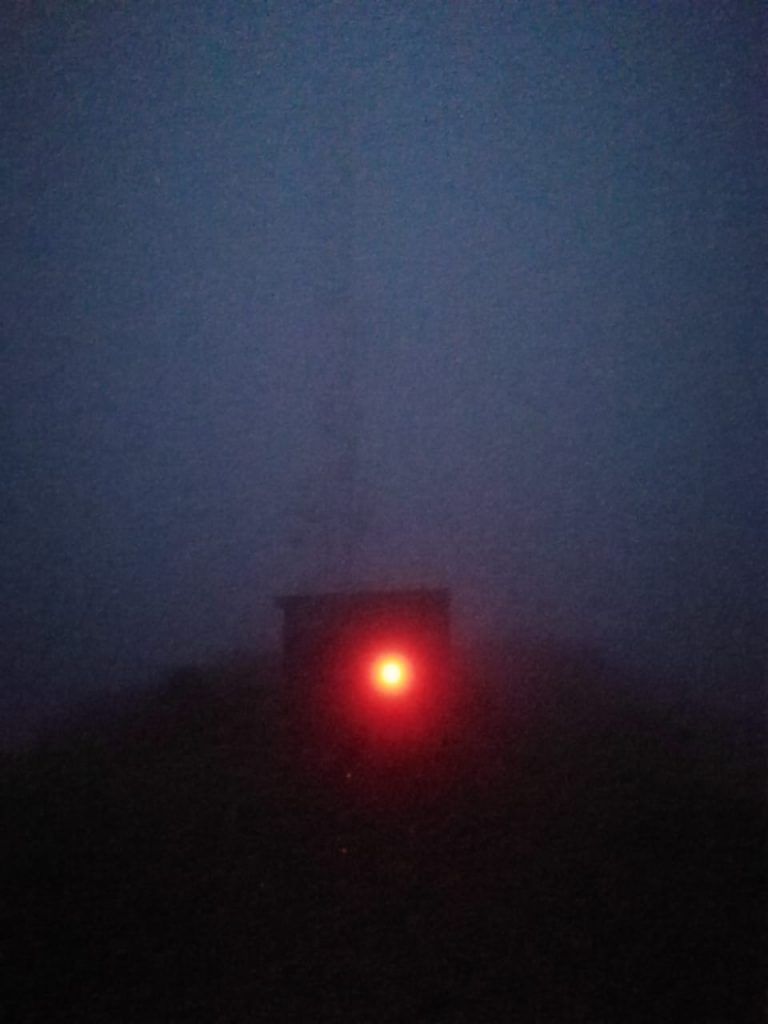 The site was left around 18:45.  The drive down in the dark and mist was a big challenge.

Jan ZS1VDV and Paul ZS1V left Stellenbosch at 10am for the Jonaskop repeater site, home of the 145.675 repeater.  It has been some time since the last visit to the site and the access road condition has deteriorated significantly.  Somewhat delayed by a puncture to one of the bakkie’s tyres, the team arrived on site just after midday.

Antenna SWR measurements on the VHF stack and both link antennas were found to be acceptable.  Output power of the repeater and both links, was also as expected.

Jan patched the link controller to take care of a slight crackle on the audio, most easily noted in the 2m repeater tail. 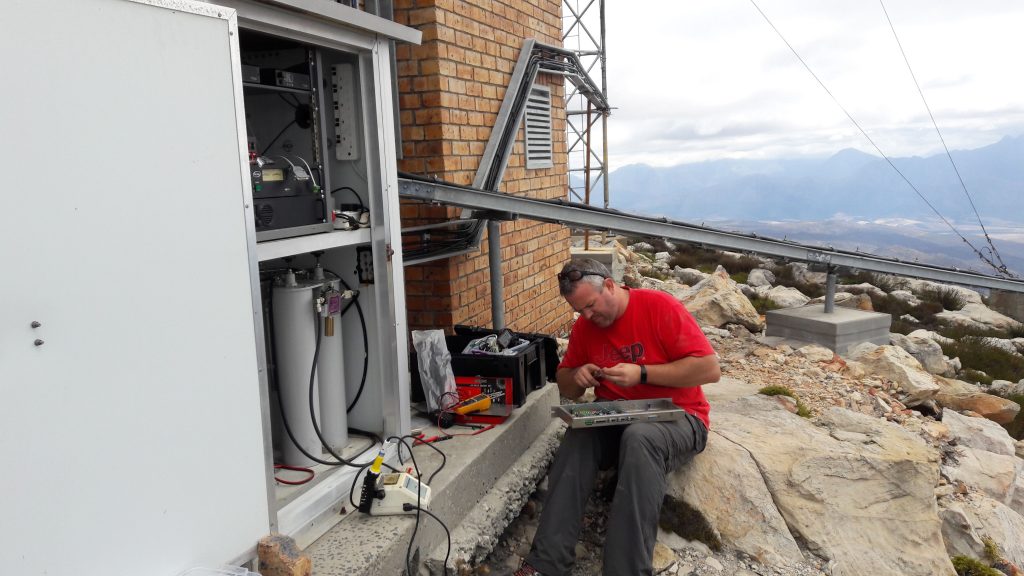 Jan busy with the link controller

Some more tests pointed to a problem with the Hanskop link radio (possibly off frequency).  This was removed and the team departed at around 15:00. 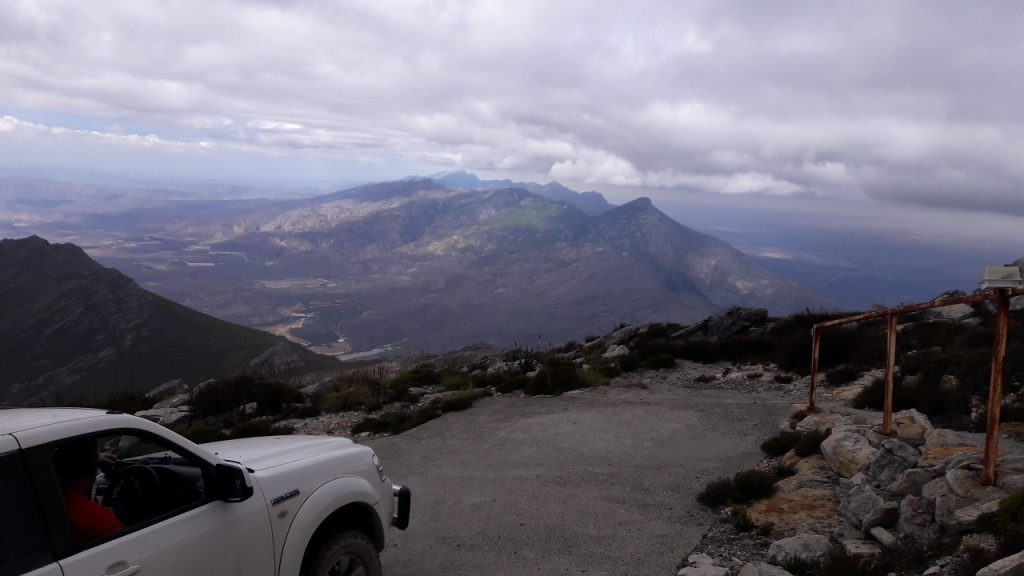 Pleasant conditions at around 15C, overcast and no wind 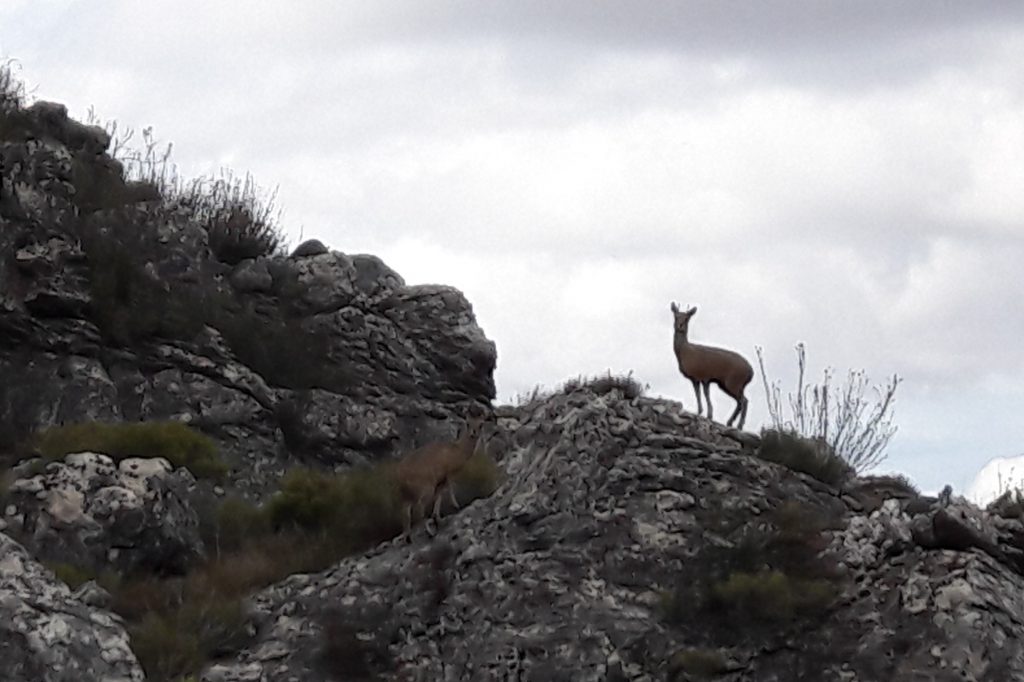 Jan and Paul arrived back in Stellenbosch just after 17:00.

Left Stellenbosch around 08:00 and reached Piketberg by 09:45

Back in Stellenbosch and unpacked by 16:15.

The UHF back2back link was moved from the QTH of ZS1DDK to Libertas on 4 November by ZS1DDK and ZS1TAF.

Today the equipment was moved on to racks in the cabinet and a link controller was installed.  A powerpole distribution block was added and all power connections migrated to powerpoles. Rack with radios and controller

This controller can now be used to link or unlink the back2back via DTMF codes.

On Wednesday 27 September at about 16:30, Paul ZS1V, Jan ZS1VDV and Wiaan ZS1WB met a representative of our Internet sponsor at the Helderberg high site to install one of the WCRWG Motorola SLR5500 DMR repeaters.  The Helderberg high site is one of the easier ones to access due to its relatively low position at around 500m ASL and its proximity to the urban area of Somerset West.

Despite the relatively low elevation in comparison to other WCRWG high sites it is quite prominent above the 100m ASL average ground level.  Good coverage is expected over most of the False Bay side of Cape Town, the Cape Flats and Northwards to Stellenbosch.

The team installed a Webb HD400 UHF dipole antenna and a short run of about 8m of EC4-50 Heliax.  Shielded and UV resistant UTP cable was run from the repeater enclosure to a nearby enclosure for the DMR repeater’s Internet access.  The SLR5500s configuration was updated to reflect the new IP environment before everything was tested and found to be satisfactory.  Antenna SWR was measured at 1.2:1.

A first QSO on the new repeater was had on talkgroup 655 between Paul ZS1V and Koos ZS5KDK before the team wrapped up and left the site just before 19.00. 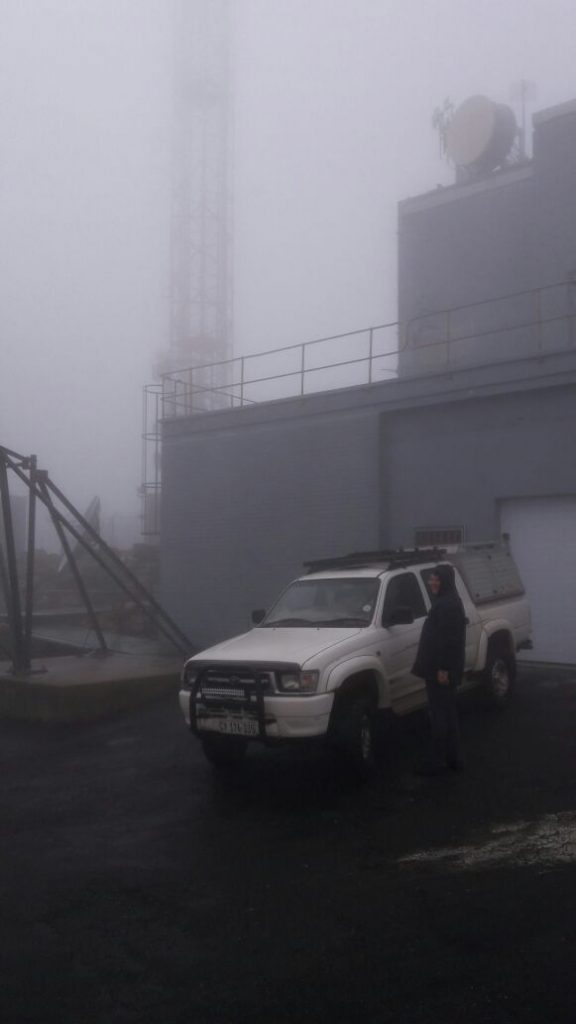 Jan (ZS1VDV) and Rassie (ZS1YT) went to Hanskop to investigate the controller not responding to DTMF.

Had to drive very slowly up as the road is in very bad condition and had the sun just over the horizon. On site by 08:15. The temperature outside was 1.2 degrees, the wind was cutting through everything.

The problem with the controller was found to be interference on the 145.600 Repeater.  The interference is not from our equipment but most likely from WISP equipment.
The 145.600 repeater’s SQL was closed to 1.1uV (about 4 times more that what it should be).  This only helps about 80% of the time. The interference will need more work/investigation.